The Black Crown for XVIIth Karmapa

In December 2017 in Bodhgaya, India, during the daylong mandala offering performed by the representatives of the Karma Kagyu centres and monasteries from all over the world, the 17th Karmapa, Trinley Thaye Dorje, for the first time in the history wore the new version of the Black Crown. The Crown was made in Poland by Marta Ruta according to the precise instructions of Jamgon Kogtrul Rinpoche. The Black Crown – the origin and the use of symbols Karmapas, known as the Lamas of the Black Crown, have been associated with that kind of headwear since the beginning of the 15th century. It was at that time when Chinese emperor, Yung Lo, thanks to his devotion and spiritual realisation, saw his contemporary master, the 5th Karmapa, Deshin Shekpa, in a form of Dorje Chang with the Black Crown over his head. The emperor, influenced by that vision and expressing a wish to share the possibility of experiencing such a blessing with others, decided to prepare and offer Karmapa a material replica of the crown, decorated with precious stones. Since then, all the subsequent Karmapas (from the 5th until the 16th) used it during the Black Crown initiation by giving blessing. Known as the Crown of Liberation, it symbolises a power that Karmapas bring to all sentient beings. There are also traditional Tibetan explanations, according to which Karmapa in one of his previous incarnations reached the ninth level of the Bodhisattva. After that, one hundred thousand dakinis weaved the Black Crown from their hair and gave it to the Karmapa as a symbol of his realisation.

The Black Crown of Activity The important thing is that in the Karmapa lineage there is also a second Crown, known as the Crown of Activity. Its story goes back to the times of the 1st Karmapa, Dusum Khyenpa. After having received preliminary ordinations in the monastery, he had a vision in which the Buddha himself offered him a black hat. Karmapa commissioned a production of a faithful replica and from that moment all the Karmapas wear such a replica on very special occasions.  According to the statistics delivered by the 4th Jamgon Kongtrul Rinpoche, what makes the Crown of Activity so important is the fact the 16th Karmapa was wearing it only once a year, during Losar, a Tibetan New Year.

The history of the new Crown The first version of the new Black Crown of Activity was given to the 17th Karmapa as a gift in 2015. In November that same year he presented it on Swayambhu in Kathmandu, during his first official visit in that place in this incarnation. Then, the 17th Karmapa asked to prepare a crown for Jamgon Kongtrul Rinpoche, which was given to him in December 2016 in Bodhgaya. This way, for the first time in the history of Kongtrul lineage, Jamgon Kongtrul received a Red Crown of Activity. Rinpoche liked the Crown so much that he suggested to prepare, according to his instructions, yet another Black Crown for Karmapa. Karmapa agreed to receive this gift and that was the reason why I visited Bodhgaya again, in December 2017, says Marta. During a daylong ceremony of mandala offering, Karmapa wore the new Crown together with a special red coat embroidered with a golden dorje. It is a vajra coat and it signifies that from that moment on the Karmapa is a ngagpa. The new version of the hat has, for the first time in history, a moon and the sun, explains Marta. So far, four Crowns have been made – two for the 17th Karmapa and two for Jamgon Kongtrul.

The Stupa House Foundation sponsored Marta Ruta’s travel to Bodhgaya in India in 2017. Thereby, the Foundation, together with all the donors transmitting 1 percent of their income taxes to the Foundation, became participants in the creation of the Crown. Thanks to that, a bigger number of people have gathered merit during this exceptional, historical event. 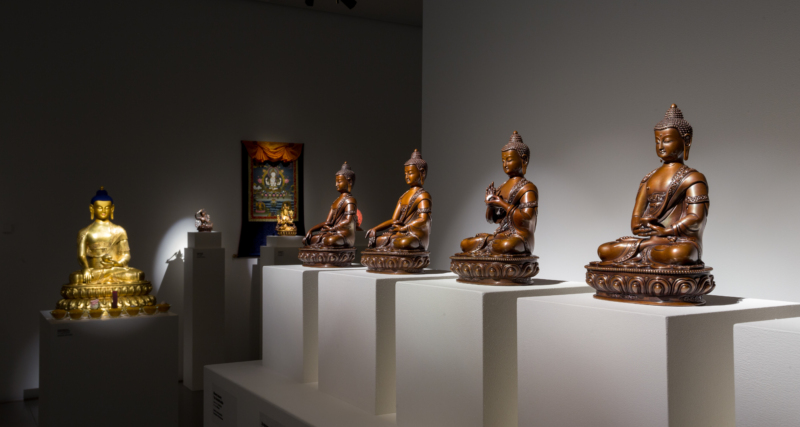 “The richness of mind. Treasures of Himalayan art”. The success 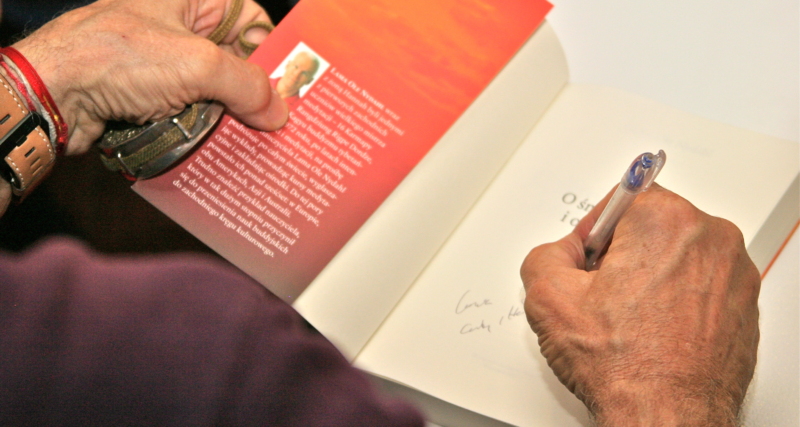 Fearless Death: Buddhist Wisdom on the Art of Dying